As of March 15, 2018, the defense, or to be more precise, the suspect, his defense counsel or legal representative, had the opportunity to appeal the notice of suspicion. Prior to that, the defense had not been granted such a right. Despite the progressiveness of such a provision of the CPC, a person may exercise such a right only after the expiration of two months from the date of notification of the person on suspicion of committing a crime. Two months is not much and not enough, but it is enough to complete the pre-trial investigation, including by drawing up an indictment by the investigator and agreeing with the prosecutor and sending the latter such an act with a register of materials to the court. It should be noted that in this case the right of the defense to appeal the suspicion is completely nullified. 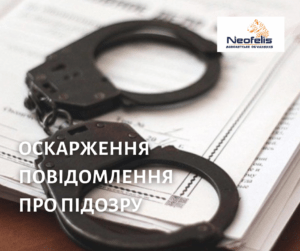 You should also be prepared for the fact that after the notice of suspicion has been appealed and revoked by the investigator or prosecutor, the shortcomings of the previously made suspicion may be corrected or a new suspicion re-filed and handed over to the same person in the same criminal proceedings.

However, if after the expiration of the previously mentioned two-month period, the pre-trial investigation for one reason or another has not been completed, it is worth knowing what to look for when appealing a notice of suspicion.

Notification of suspicion as a procedural action is carried out in an exclusively defined list of cases and as a procedural document has clear requirements for its content, which are often unreasonable and incorrect legal qualification of the crime.

It is also not uncommon for law enforcement officials to violate the procedure for notifying a suspect: missed the pre-trial investigation, handing over the suspicion by an unauthorized person, handing it over without making an entry in the ERDR, violating the procedure for handing such a notice.

When examining a report of suspicion as a procedural document, its text should be read in as much detail as possible, as minor details (dates, signatures and other details of the document) and important parts of it can be read – the presence of evidence and its significance for a person’s suspicion of a crime.

It is important to pay attention to how and by whom the suspicion is made and handed over. In any case, the CCP requires service, not transmission of the suspicion by any other means. In other words, sending by mail or leaving a suspicion at the door is illegal.

With regard to establishing the appropriate subject of suspicion, such are the prosecutor and the investigator. However, if the suspicion is made by an investigator, then such a document must be approved by the prosecutor. It should also be borne in mind that there is a category of persons to whom a notice of suspicion may be served only by specifically designated officials. For example, a written notice of a judge’s suspicion is given by the Attorney General or his deputy.

The right to appeal a suspicion should not be disregarded, as the service of a notice of suspicion is usually followed by the application of a precautionary measure to the suspect, and therefore, if the suspicion is upheld, the relevant precautionary measure seizure, return of bail, termination of seizure of property, etc.). In addition, if the court finds it illegal to serve a notice of suspicion, you may well subsequently apply to the court for compensation for wrongful acts committed against you by law enforcement agencies.

If you still have questions or need qualified legal assistance from a lawyer in criminal cases, the team of Neofelis Law Group JSC is happy to help.